Differences Between the DR Redi-Plow and Traditional Snowplows

No one likes being stuck waiting for the snowplow to free them from “snow jail.” But for many people, when a snowstorm hits, that is their reality. Shoveling and snow blowing can be great for walkways and a limited amount of driveway clearance. But the longer the driveway, the less likely it is that you can get by with these old standbys. Even if you have been doing exactly that for years, there comes a time when you say, “Enough already, I’m getting a plow!”

Then you begin your research on traditional plows. By “traditional” we refer to plows with hydraulic controls that are operated from the interior of your vehicle.

Immediately, you’re confronted with two unwelcome facts. First, these things are expensive! There is a huge range of products and prices out there but typically you will be looking at $3,000-$5,000, depending on the size and make. Secondly, you realize that these plows are not quick or easy to take on and off. Once you mount them for the winter, they go everywhere with you, killing your mileage and making parking and maneuvering in tight spaces more difficult.

Traditional snowplows are expensive and heavy.

For those who get a LOT of snow and need to be plowing on a regular basis, those may be perfectly acceptable facts. But many of us live in areas where we get (in a normal year) 1-3 significant snowfalls per winter. And some years we may only get “dustings” with no real accumulation. If that’s you, the idea of driving around for 3-6 months with a heavy, mileage-wrecking plow that’s a pain to park at the grocery store may feel like overkill. It's a bit like using a battleship to do the job of a rowboat!

A Different Kind of Plow

The Redi-Plow started with the “only when you need it” concept. That starting point established several parameters. First, it needed to be lightweight and easy for one person to put on and off the vehicle. Secondly, it dictated that it could not be dependent on hydraulics since that would complicate the on/off process. Finally, it also assumed that the target customer would be willing to sacrifice the convenience of in-cab operation for the benefit of having the plow on demand only. To put it another way, the Redi-Plow was conceived as a homeowner snowplow, not a commercial one.

The Redi-Plow blade attaches to a front receiver hitch (included with the plow). The blade is constructed of high-strength aluminum that is light and durable. After initial installation, you simply attach the plow using the quick-attach steel brackets. To move it up, into travel position, you just lift the plow, one side at a time, onto the push frame and lock it in with pins. This lift is quite manageable for almost anyone. The plow blade weighs either 68 lbs. or 114 lbs., depending on the model, and you only need to lift half that weight at a time less than a foot. That’s it! When you’re done, you can remove the blade completely just as easily.

With the Redi-Plow, once you put the blade down in plowing position, it stays down until you manually raise it (or detach it). With a traditional plow, you could raise the plow blade hydraulically before reversing, then hydraulically lower it before going forward again. The Redi-Plow simply releases when you reverse, allowing the blade to slide back with your vehicle. When you move back into forward, it will resume plowing position.

The plow blade is engaged while going forward and releases when the vehicle is put in reverse.

One of the features of a traditional plow is the ability to angle the blade so that snow can be pushed to either side of the vehicle. The Redi-Plow PLUS model offers a manual version of this feature with your choice of three fixed positions, secured by a pin. (The base model is more stripped down and has only one, straight ahead position). 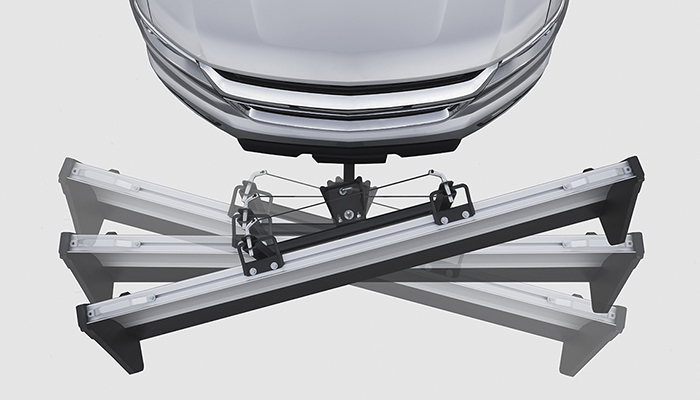 The Redi-Plow PLUS offers 3 blade angles.

Obviously the Redi-Plow doesn’t have all the features of a commercial style snowplow. But compare it to how you are currently getting your snow cleanup done. If you are snow blowing and/or shoveling for more than half an hour or so, you will be amazed at how quickly you can be “out of jail” and on the road with a DR Redi-Plow!